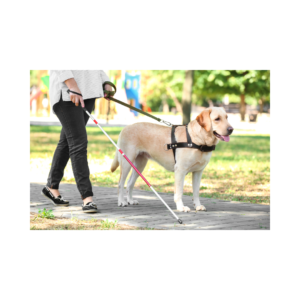 More than twenty years ago I led the animal control division for an agency in northern California, and at one point we received a series of complaints from students at a local community college regarding a fellow student’s emotional support animal (ESA). The students were in a great state of anxiety and wanted our agency to intervene and prohibit the animal from accompanying its owner to class. We soon learned the college had already acted and forbade the owner from bringing their ESA onto campus anymore. If you are picturing the ESA as a quiet, loving Labrador Retriever you are mistaken. This ESA was a large python. IF it did indeed alleviate emotional stress for its owner (which I doubt; it was more likely an example of college hijinks), it certainly created a great deal of emotional stress for everyone else in the classroom!

Since that time there has been an explosion of fake ESAs throughout the country by pet owners playing on the confusion around ESA versus service animal regulations. Service animals are defined under law and undergo rigorous and expensive training to learn how to help their owners. ESAs are not regulated, and their designation can be easily obtained without specialized training.

Many pet owners have obtained fraudulent certificates designating their pets as ESAs simply so they can bring them into areas where pets are generally not allowed, or to avoid paying for their pets to travel with them. These certificates can be obtained for a few hundred dollars online, and the websites will also sell harnesses, tags, and other items to provide the appearance of this status for the owners.

Most people are reluctant to confront these scammers, afraid of being sued under the Americans with Disabilities Act or getting into an argument with the pet owner. I watched this unfold at a restaurant where I was dining on the outdoor patio. A patron unleashed her large dog to wander around the patio. The waiter asked her to put her dog on a leash, and she retorted that it was a service animal and allowed to do that. I happened to know this person and knew that her dog was not a service animal. The waiter did not escalate the situation but I’m sure he was incensed. The dog was gentle but did disturb patrons by begging for food at their tables. The arrogance of the dog owner was shocking and cast a dim light on responsible pet ownership, not to mention creating potentially difficult situations for genuinely disabled service animal owners.

Many people have attempted to classify their pets as ESAs for the purpose of travel to avoid paying for their pets to fly with them. Aside from dogs and cats, these animals have included peacocks, turkeys, monkeys, squirrels, hamsters, and more. An “ESA” pig and its owner were thrown off a flight from Connecticut to Washington, D.C. in 2014 after the pig defecated along the passenger cabin aisle and rendered the plane unusable for that flight. There have been many documented incidents of fake ESA dogs attacking members of the public, including people on airplanes or in airports. In 2017 a man trapped in a window seat was seriously attacked by the large ESA dog sitting on its owner’s lap next to him. That same year, a five year old girl was badly mauled in her face by an ESA dog while she was waiting to board a plane at Portland International Airport. Owen the miniature horse with his Shire horse friend, Murphy.

Service animals are defined under law and undergo rigorous and expensive training to learn how to help their owners. Guide dogs lead people who are visually impaired, and signal dogs alert hearing impaired people to important sounds like smoke alarms and doorbells. Because of their enormous capacity for scent discrimination and detection, other service dogs provide alerts to inform their owners of an impending epileptic seizure or dangerous blood sugar levels (for diabetic owners). Service animals assist their owners with mobility issues by retrieving dropped items and opening doors as well as providing balance support for owners with stability difficulties. They can be used to ease the symptoms of psychiatric disorders by interrupting self-mutilating behaviors. Legitimate service dogs have provided life-changing benefits for veterans dealing with PTSD. It should be noted that not all disabilities are visible and judgments on the legitimacy of a service dog used for ESA purposes should not be based on appearances.

Service animals assist people experiencing disabilities to live fuller lives. They help their owners travel, pursue careers, attend social and cultural events and live more independently. For these reasons they are protected by the ADA for public access, the Fair Housing Act (FHA) for housing access, and the Air Carrier Access Act (ACAA) for air travel.

The ADA does not recognize ESAs and they are not allowed in stores, restaurants, or other public places that are not already pet friendly. Airlines may choose to allow ESA dogs to fly alongside their owner, but the ACAA specifically excludes reptiles, rodents, and spiders in the cabin. In January of this year, the U.S. Department of Transportation revised the ACAA because of the increased number of complaints and incidents regarding fake ESAs. The owner must provide written documentation of their need for an ESA and it must meet strict service animal standards to be allowed to fly. Many airlines have decided to no longer allow ESAs to fly for free unless they meet the psychiatric service animal requirements to show the animal serves a genuine disability as defined under the ADA.

This month California has also taken an important step in regulating ESAs and reducing the rampant fraud in this field. California Health and Safety Code Sections 122317 et. seq. now provide more regulations regarding ESAs. For example, a person or business that provides a dog for use as an ESA must provide a written notice to the recipient of the dog stating that the dog does not have the special training required to qualify as a guide, signal, or service dog and is not entitled to the rights and privileges accorded by law to those dogs.

They must also inform the recipient of the already existing provisions set forth in CA Penal Code Section 365.7 that knowingly and fraudulently representing oneself to be the owner or trainer of any guide, signal, or service dog is a misdemeanor.

Health care practitioners are prohibited from providing documentation relating to an individual’s need for an ESA dog unless the health care practitioner complies with specified requirements, including holding a valid license, establishing a client-provider relationship with the individual for at least 30 days prior to providing the documentation, and completing a clinical evaluation of the individual regarding the need for an ESA.

Violations of the written notice requirements or knowingly and fraudulently representing, selling, or offering for sale an ESA dog as being entitled to the rights and privileges accorded by law to a guide, signal, or service dog are now subject to a civil penalty.

It’s about time that ESA fraud is confronted, and penalties imposed for imposters. Their abuse of the legitimate opportunities for people living with disabilities has eroded public confidence in service animals that are needed to assist their owners with living independent and more fulfilling lives. Service animals are the highest example of the human-animal bond and their use should be protected.

The Crisis in Veterinary Medicine