Animals are a beloved and popular topic for film and television because they provide heartwarming stories and highlight the intrinsic reward of the human-animal bond. Many wonderful TV shows and films have helped elevate the public’s awareness of kindness towards animals, how to care for them, and the importance of protecting them in our society. Keeping animals in the forefront of peoples’ minds is a good thing.

However, my toes curl and my blood pressure rises when I see the incredibly offensive and inaccurate depictions of animal control officers in these forms of entertainment. I did a quick internet search of “dogcatcher movie” and was stunned by the number of films that include the dogcatcher as the evil villain, going back to the early 1900’s!

Even the term “dogcatcher” is a derogatory and outdated label; the proper term is animal control officer (ACO), humane officer, or similar professional title. In film and television ACOs are universally depicted as mean, animal-hating, incompetent buffoons. These caricatures in no way accurately depict the hard working, compassionate, and dedicated women and men that have chosen this career because they believe deeply in helping animals and the people who care about them.

ACOs work at all hours of the day, in all sorts of weather, to protect and save animals in need. It is a physically challenging and emotionally taxing profession that garners modest pay and few accolades from the public, especially thanks to the portrayal of ACOs in entertainment. The reality of ACO work is a far cry from its false depiction.

ACOs investigate animal cruelty and neglect, removing animals from inhumane and abusive situations. They capture dangerous dogs that pose a danger to people and other animals, preventing severe attacks and deaths. ACOs investigate dangerous and vicious dog cases and brings these cases for administrative or judicial review to place restrictions over keeping such animals.

ACOs are mandated reporters of child, elder, and dependent-adult abuse. Many times DACC ACOs have responded to calls of animal neglect only to find humans at great risk as well. Our officers have, on countless occasions, obtained help for vulnerable humans from law enforcement or social services agencies. 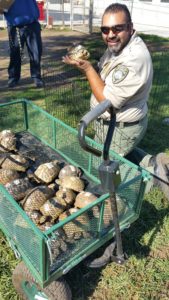 ACOs respond during wildfires or other emergencies, working in dangerous conditions to rescue the pets and livestock left behind by evacuated residents. These animals are transported to safe temporary sheltering while DACC provides care for them until they can be reunited with their owners.

ACOs enforce animal licensing and rabies laws. Rabies is almost 100% fatal, an excruciatingly painful death that is almost eradicated in the United States thanks to pet rabies vaccination and licensing programs. Ensuring compliance with these laws has made our nation safer and healthier.

ACOs enforce other important laws as well. These include mandatory spay/neuter laws to reduce pet overpopulation and euthanasia; microchip laws to ensure pets have permanent identification in case they are separated from their families; and the safety of animals in animal-related business such as pet stores, grooming facilities, boarding kennels, and more. ACOs regularly assist law enforcement officers in serving search warrants or securing animals so police and sheriff are not harmed by animals on the property.

Hollywood, I understand that a story needs a good villain. Can’t you do better? I’m sure your creative writers can come up with better bad guys than the tired old trope of the dogcatcher. How about dogfighters (dog fighting is a felony and a brutal, vicious activity in which animals suffer horribly). How about cockfighters? That, too, is a crime and is prevalent in many parts of the country. Dognappers are good villains – we have all heard the heartbreaking and frightening media stories of people being shot or assaulted while their beloved pets were stolen from them.

In all these cases the ACO is a hero – the officer breaking up an illegal animal fight; the officer who finds the kidnapped dog, scans it for its microchip and returns it to its family; the officer rescuing horses from a burning barn; or the officer who sees that an abused elder and her pet receive the services and care they need.

In fact, the State of California recognizes the importance and value of ACOs through the State-designated Certified Animal Control Officer (CACO) program. ACOs must complete rigorous training and experience to obtain CACO certification and maintain their status through regular trainings. There are more than 300 CACOs in California, and about 50 of those work for DACC.

This week is National Animal Control Officer Appreciation Week. Please join me in thanking our ACOs for their dedication, compassion, and bravery. Hollywood, please continue this tribute by depicting ACOs as the true professionals they are.