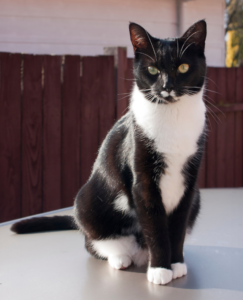 Like most people who work in animal welfare, there have been animals I have come across in my career who have left lasting impressions on me. I still think about them decades later, sometimes with happiness and sometimes with regret.

One animal I still recall vividly was a beautiful black and white tuxedo male cat who lived with other outdoor cats in the apartment complex where I lived when I was 21 years old. The group of cats, about a dozen, ate out of the complex’s trash dumpster and were generally kind of shabby-looking. Most were feral and unapproachable, but this one was friendly and appeared healthy. I was particularly drawn to him because of his sweet nature and striking appearance. I would talk to him when I parked my car, and one day he followed me home to my apartment.

He meowed insistently on my patio, which infuriated my own cat and really got my Labrador retriever agitated. I agonized over wanting to add him to my pet family but realized I couldn’t. I was just starting out in my career and couldn’t afford another pet, my landlord wouldn’t allow another one, and I didn’t know if he could be successfully integrated into my small apartment with my other animals.

I decided to bring him to the humane society where I worked, have him neutered and vaccinated, and return him to his colony. Unfortunately, when I brought him in he tested positive for a fatal virus that would cause a slow death for him and is contagious to other cats. The recommended response for virus-positive cats was euthanasia to prevent the spread of the disease or caring for the cat indoors until the disease became too advanced to bear. I couldn’t bring him into my home where he would infect my existing cat and returning him to the colony where he would not receive supportive health care would be inhumane. With no other options at the time, he was humanely euthanized. However, I still wish things could have gone differently and am deeply saddened by what happened to him.

I think of him often these days when DACC considers its approach to the admission and management of cats in our communities. Outdoor cats are the subject of strong and diverse opinions of what should be done about them. While packs of stray dogs create serious public safety concerns about bites and maulings, free-roaming cats do not generate the same attention. However, they can cause quality of life issues for residents whose properties are disrupted by their presence, spread zoonotic diseases, fall victim to predation from coyotes and dogs, be killed by cars, and face other challenges.

On the other hand, bringing cats to animal shelters is not the solution most people think it will be. The redemption rate for lost cats is abysmally low nationwide (about 2% – 4%) because most owners do not come looking for them, or don’t do so until long after the stray holding period has expired and the cats are no longer there. Feral (unsocialized) cats brought to animal shelters have very little chance for adoption. People come to adopt pet cats, not wild ones. These cats may also be infected with fatal viruses. They are almost always humanely euthanized. The unweaned offspring of outdoor cats that are brought to animal shelters without their mothers have little chance of survival in an animal shelter. DACC has a vibrant foster program to help them, but if they are already ill or too unthrifty to survive then they must be humanely euthanized.

Scientific papers supporting the position of outdoor cat advocates promote the importance of outdoor cat population management through spay and neuter and not removal. These papers have demonstrated that simply trapping and removing cats from an area causes a vacuum for other cats to fill, thereby perpetuating the homeless cat problem. However, sterilization and return of existing cats maintains the population without exponential growth through reproduction and prohibits new cats from entering the population because the existing resources (food, water, shelter) are already being used.

Both positions have very valid arguments and there is no clear solution that will satisfy all concerns and unite proponents of diverging opinions. This is also complicated by the different scenarios we see in the existence of outdoor cats.

Some cats are owned but can go outdoors and may roam for some time. They don’t come home every evening, so the owners don’t immediately look for them if they aren’t seen for a day or two. Other cats don’t really have owners but have found resources to support them because kind individuals put out food for them and there is safe shelter and lack of predators. Then there are the “colony” cats where a large number have found resources on their own and may or may not have someone looking out for them. The lucky ones have concerned people who manage the colony by trapping, sterilizing, and vaccinating the cats to make sure they remain healthy and do not reproduce. Other colonies are unmanaged, and the cats often suffer from malnourishment or starvation, illnesses, injuries, overpopulation, and early death.

Because of these factors, the animal welfare profession has reconsidered the best approaches to homeless cats and DACC has adopted nationally recognized best practices regarding the admission of cats. We did this in consultation with veterinarians that specialize in animal shelter medicine at the UC Davis Koret Shelter medicine program as well as leading animal welfare organizations around the country.

At DACC, healthy cats with no signs of illness or injury and without owner identification are encouraged to be kept in place where they were found because they are thriving in their current environment. Many free-roaming cats have a human family or caregiver and vary their time between the home and outdoors. Other times, a home or group of homes is providing food and water to unowned neighborhood cats. These cats have established themselves as part of their neighborhood, are being cared for, and do not need care center assistance.

Bringing these cats to a care center removes them from their home territories, and caregivers generally don’t look for them at care centers for many days or weeks, if ever, contributing to the low redemption rate. Deferring healthy stray cats provides better options for them to remain in their home or group of homes that care for them and where they are thriving. Any cats or kittens that are malnourished, ill, injured, in danger, or require other assistance are welcomed at DACC so they can receive the care and protection they need.

Partnering with the community is key to addressing concerns about outdoor cats and we have increased our resources to help support community members and neighborhood cats. We offer cat deterrents to residents so they may discourage cats from interfering with the residents’ ability to enjoy their homes. Our finder-foster program for underage kittens found without a mother provides free milk replacer and other resources so community volunteers can raise unweaned kittens until they are old enough for adoption.

Spaying and neutering cats is the key to reducing the population of unwanted, ill, and homeless cats. DACC provides the Good Neighbor Cat Spay and Neuter program, where we provide low-cost spay/neuter surgeries for cats at six of our animal care centers. Residents may bring in cats to be sterilized to prevent the birth of unwanted kittens. All these approaches chip away at the problems we see for outdoor cats and can, over time, ameliorate many of the concerns.

Cats occupy a unique niche in our communities. They can be beloved indoor pets, allowed to roam in and out of the home, live exclusively outdoors, or occupy locations that are unsuitable for their safety or the safety of wildlife. There isn’t a one size fits all approach to outdoor cat management. I hope that someday all cats have loving homes where they live inside with protected outdoor areas for enjoyment. Until then, we will continue to make best efforts to provide the most suitable responses and resources based on each situation.

Information Regarding the Removal of Animals from Southern California Cat Adoption Tails (SCCAT) in Littlerock, CA