Sometimes when I ask a person if they have any pets they will tell me about a beloved dog or cat that passed away. They remark sadly that they haven’t adopted a new pet because no other animal could ever replace the one they lost. I find this very unfortunate because these well-meaning animal lovers are depriving themselves of the joy and unconditional love of another animal.

Of course, the new animal will never replace the one that passed. Each animal is a unique being with its own behaviors, idiosyncrasies, likes, dislikes, and more. Each pet that has graced my life has been an amazing companion and no subsequent pet replaced the one who passed. However, each new pet brought a different personality into my life that was full of fun, love, and new adventures.

Finny, my black lab, joined our family when I was 16 years old. He was with me through high school, college, and my first jobs in animal welfare. Finny loved to fetch, swim, chase flashlight beams, and taught himself how to break into my refrigerator. He licked my face constantly but didn’t like to snuggle in bed. He was a devoted companion in my early years, and we forged many unforgettable memories. When Finny passed, I decided I needed to have time to adjust to not having him in my life anymore. However, being without a dog is like being without oxygen for me and four days later a nine-month-old Golden Retriever entered the shelter where I worked. Gracie became my constant companion for the next nine years. Unlike Finny she did not lick my face but loved to snuggle in bed. Gracie loved children and accompanied me to schools and day cares, as well as senior citizen homes and hospitals, to visit and bring joy to the people she met. She would dive underwater to catch fish and protected my car with a ferocity that would impress any police dog.

Later came Montana, the German Shepherd Dog that protected me from a mugging one evening in the grocery store parking lot. She was the hardest driving, most energized dog I’ve ever known. She was also brilliant, learning dog tricks by watching other dogs without any direct training herself. She was completely devoted and very intuitive, and we had to keep making up new words or spelling them because if she heard the words she knew like ball, walk, car, food, etc. she would become unglued in her exuberance. Kota was an Australian Shepherd/Samoyed mix who had a rough life on the streets before joining our home. He never got over his fear of feet but had the best sense of humor and was always up for a game of tug of war. He adored Gracie and Montana and loved bread. His eyes would get a dreamy look every time we drove past the Wonder Bread factory and the aroma of baking bread wafted into my car. His favorite treat was King’s Hawaiian bread, which we would keep on hand as his special treat.

Carlisle the Newfoundland had a calm, dignified presence that hid his inner child. He would not play with any of our other dogs when we were watching, but if he thought we couldn’t see him he would happily play like a puppy with Montana. 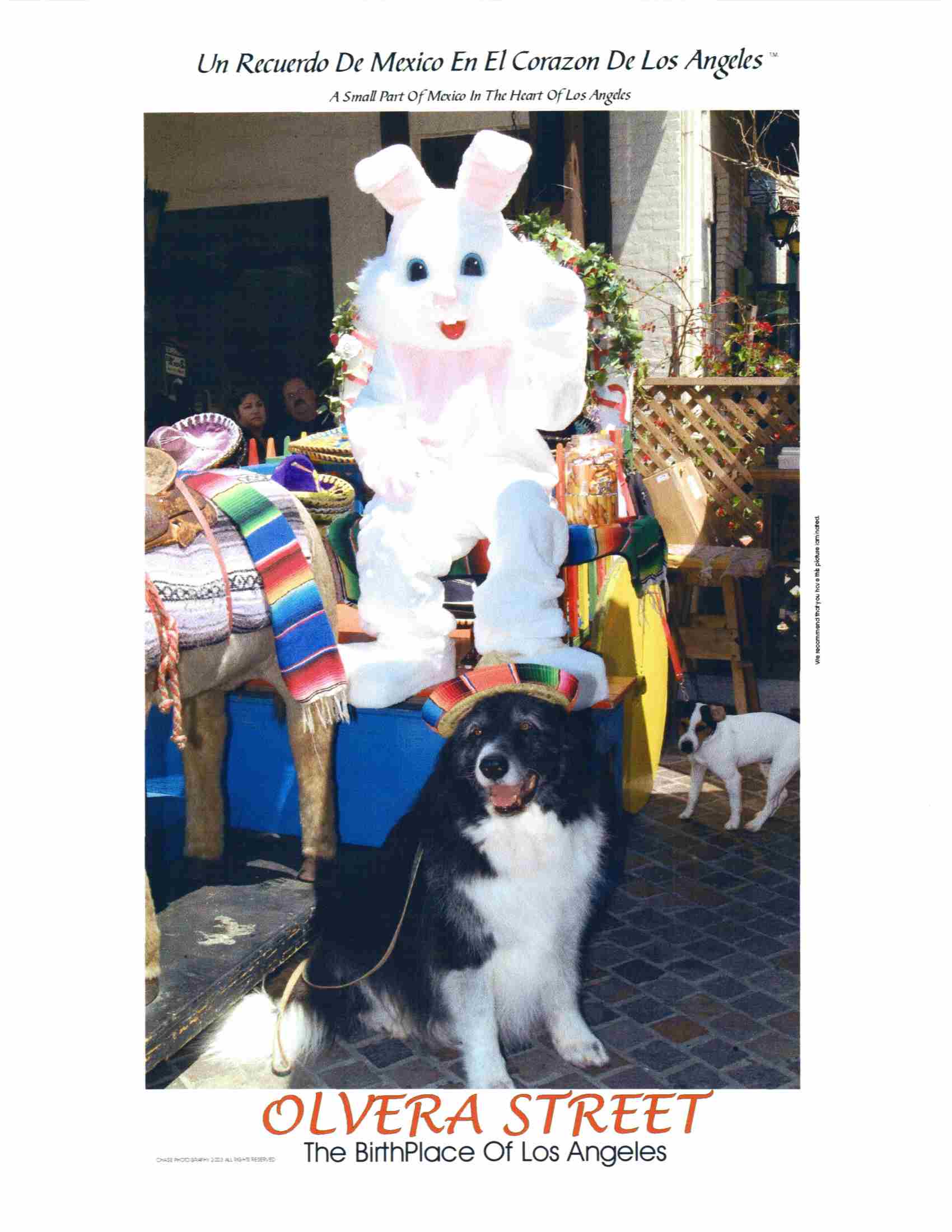 Carlisle also had a game of taking other peoples’ belongings and hoarding them. My dogs have always come to work with me, and I would constantly find items under my desk that Carlisle had stolen from my coworkers.  A cane, a tin container full of coins, a tarp, a rock that propped someone’s door open, and my boss’s dog’s heartworm medication, among others. Before I knew what Carlisle was up to, I was annoyed that my coworkers thought they could use the area under my desk as a dumping ground for their items. Then one day a colleague caught Carlisle in the act of his kleptomania and we discovered his penchant for treasure hunting. He also loved to wear hats; his favorite was a sombrero we purchased on Olvera Street in Los Angeles.

Henry the yellow lab was a “career change” dog from Guide Dogs for the Blind, which meant he didn’t pass their training program. Henry hated going for walks, swimming, playing fetch, or just about anything Labrador retrievers like to do. He was nothing like Finny. However, his calm and assuring demeanor made him the perfect pet therapy dog to work with children that were victims of violent homes. One boy had witnessed extreme violence against his mother in the home, was unable to focus in school, would not be separated from his mother, and was seriously falling behind in his emotional and social development. After several months of working with Henry, the little boy began engaging in school and was able to attend his first birthday party. He had a picture of Henry next to his bed and kissed it every night before he went to sleep. Sebastian, the first of four Great Pyrenees dogs we would adopt. Sebastian liked to sleep on the cool tiles of our bathroom floor with his back against the wall. In the middle of his sleep, he would roll over so his feet and legs were pressed so close to the wall that he could not get up or reposition himself to roll the other way. He woke us up several nights each week with his attempts to free himself, and I would stumble out of bed to pull all 120 pounds of him away from the wall so he could again lay in a normal position.

Isabella, another Great Pyrenees, joined Sebastian in protecting our home and thwarted two burglary attempts. Isabella loved children more than anything; she was initially found as a stray at an elementary school. Her favorite day of the year was Halloween, when she would sit on the porch with me to hand out candy and get petted by all the neighborhood children. There was often a line at our home because the kids all wanted to pet her. She loved going to an annual Christmas party with dozens of children. One time, a parent set their little boy next to Isabella, who gently placed her paw over the boy’s leg as if to say, “Don’t worry, I’ve got this. He is safe with me.”

Rebecca was surrendered at our Lancaster animal care center by her owners at five months of age because they didn’t have time for her. Another Golden Retriever, Rebecca became the bane of Sebastian’s existence. Rebecca liked to grab Sebastian by the tail and drag him backwards across the tile floor. He was too gentle and kind to correct her but would look at us with pleading eyes to “please make her stop!” We would find him hiding in the bathroom or pantry to avoid her.

Lucy, a Bernese Mountain Dog, was adopted from our Agoura animal care center as a playmate for Rebecca and relief for Sebastian. Lucy was first passed over by one adopter, then returned by the second adopter because of her intense personality. However, Lucy was a perfect fit for our home. Lucy loved with a passion unlike any other dog I’ve had. She followed me so closely that she would pop the back of my shoes off when I walked. Once time, when I returned home after being away for several days, she was so excited to see me that she sprained her tail from wagging it in excitement. Poor Lucy would cry every time she wagged her injured tail or sat down, and I had to take her to the emergency veterinarian for pain and anti-inflammatory medications.

Dino, our third Great Pyrenees, was surrendered to rescue when his owners were moving. He had the benefit of a great upbringing and came to us with very good manners. He was horrified when we told him he was allowed on the bed; this was NOT what he was taught. He rarely gets on the bed, and if he does, he has a guilty look on his face each time. He just doesn’t enjoy it. 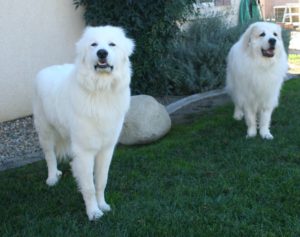 Holly, another Great Pyrenees, just joined our pack at Thanksgiving, 2020. At one and a half years old, she started off quite timidly but has built her confidence over the past months. She enjoys grabbing Rebecca‘s tail as she’s running, which is poetic justice for the indignities Rebecca inflicted on Sebastian years ago. Holly has learned the best way to get a toy away from another dog is not a direct grab, but instead to back up to the dog and sit on it. Dino or Rebecca get irritated and leave the toy, and Holly accomplishes her objective without a fight. It has been fun watching her personality bloom and I look forward to discovering the dog that she will become as she matures. Throughout the years, several cats also shared our home and brought their own unique personalities to the family. Murphy was a short haired black and white cat who slept with his arms around my neck every night. He was best friends with Finny and even came on walks with us. Thai was a male Siamese mix who was very loving to me, but invisible whenever people came to visit. Alexis was a long haired black and white cat who I adopted as a friend for Thai. Thai, all thirteen pounds of him, took one look at this hissing kitten, vomited, ran away to hide under the bed, and didn’t come out for a day. I named Alexis after Alexis Carrington, the character played by Joan Collins on the Dynasty TV series (a popular show at the time) because she was also very beautiful and very controlling. She and Thai became fast friends, and she ruled over all our big dogs for the next seventeen and a half years.

Each of these animals lived their lives with us until old age or illness took them. Each loss was very difficult, and none of the animals were “replaced” by the others that came after. Each animal holds a special place in my heart, but there will always be room for another. If I had stopped at Finny and Murphy, I never would have known Gracie, Montana, Kota, Thai, Alexis, Carlisle, Henry, Sebastian, Isabella, Rebecca, Lucy, or Holly. I would have missed out on all these wonderful, unique relationships.

That’s the thing about love; it is limitless. Each new pet creates a different relationship full of love, joy, and companionship. It will not be like the last one, but it will be equally as important in a different way. If you have been putting off getting another pet because it will not be the same as your last one, please reconsider. Open yourself to the unknown possibilities of this new relationship and all the love it will bring to your life.

Have You Hugged Your Pets Today?

But What About the Animals?