In last month’s blog I listed the many unusual animals DACC has impounded throughout the years. I challenged readers to guess which two species of animals that DACC has not impounded, promising to reveal the answer in this month’s blog.

Before I get to the answer, I think you will be interested in reading about another extremely unusual wild animal case we had. In 2019, we were informed that the Wildlife Waystation was closing after 43 years of operation. The Waystation, located on 160 acres in unincorporated Los Angeles County near Sylmar and Tujunga, had served as a sanctuary for unwanted or abused wild and exotic animals that had no place to go. Unfortunately, after financially struggling for many years the Waystation was unable to continue.
Many former circus animals, zoo animals, and exotic pets were there, as well as chimpanzees rescued from laboratories. The wild species were regulated by the California Department of Fish and Wildlife (CDFW) and sometimes the United States Department of Agriculture’s Animal and Plant Health Inspection Service (APHIS). There were also domesticated animals that were under DACC’s jurisdiction.

The CDFW stepped in to take control of the facility and ensure the wild animals were properly cared for while they identified new homes for them in sanctuaries or zoos around the country. DACC staff was there daily for ten months, assisting the CDFW and providing care for the domesticated animals.

DACC handled the rehoming of all the domestic animals, birds, and bison. The bison joined the existing bison herd at William S. Hart Park in Newhall and can be seen by visitors today. Our Equine Response Team volunteers helped with the trailering and transporting of the animals, and one volunteer (a fish specialist) handled the relocation of the koi fish. It was a very successful partnership and all the wild animals were placed with zoos or other sanctuaries, except for the chimpanzees. They will be rehomed when the receiving sanctuaries’ facilities currently under construction are finalized for their arrival.

Now, on to the answer to last month’s blog question. Which two species of animals did DACC not impound?
It wasn’t th e Bactrian camel. We impounded Wally the Bactrian camel in 2014 after he escaped his corral in Acton and seriously attacked a 72-year-old man walking in the neighborhood. Wally was quarantined at our Lancaster animal care center for six months for rabies observation and his owner was convicted on a misdemeanor count of failing to confine his animal.

It wasn’t the capybara, the world’s largest rodent who hails from a semi-aquatic habitat in South America. Our Agoura Hills animal care center responded to a call in Thousand Oaks, where a resident discovered a young capybara in their backyard. The yard was lushly landscaped, and the capybara was enjoying a swim in the pool! She was friendly, and we placed her with a licensed wildlife facility who provides animals for filming. Not too long after, I saw an ad on TV for a mobile phone company, in which the user of the mobile phone was calling to report a capybara in her backyard. I can’t help but think our case was an inspiration for this advertising campaign, and that might have even been our capybara in the ad.

It wasn’t the dolphin or sea lion. DACC used to respond to calls for marine mammals and birds and has helped these animals in the past. However, in 2002 we entered into an agreement with Marine Animal Rescue to respond to these calls on our behalf. They are much better equipped to handle the unique needs of these animals and provide excellent rescue services for them.

There is a story behind every species listed, but there isn’t enough space in this blog for all of them. So which two animals from that list has DACC not impounded? The first is the pushmi pullyu, the mythical two-headed gazelle/unicorn cross from The Story of Dr. Doolittle. The story goes that it has a head at each end of its body so it can speak with one head while eating with the other so it will not be so rude as to speak with food in its mouth. 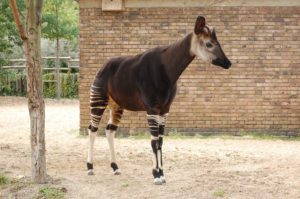 The okapi, also known as the forest giraffe, is a beautiful and shy creature from the forests of central Africa. They have a rich, mahogany coat with striped legs and haunches, and their body shape resembles a giraffe. I think they are amazing creatures and threw that in because I think more people should know about them.

We have never had an okapi in one of our animal care centers, but if we do you will be the first to know!

Marcia Mayeda
You can subscribe to Marcia’s blog here: https://animalcare.lacounty.gov/directors_blog/